Some days, really weird sets of coincidences happen. For me, yesterday was one of those days.

Readers of this blog are probably not aware that I’m a photographer, and for a number of years I’ve followed many of London’s up-and-coming soul singers, musicians and hip-hop artists. London is brimming with musical talent, and my photography has allowed me to follow and get to know some of the best. Among the most amazing singers I’ve got to know is Baby Sol. I was lucky enough to see one of her first public appearances during a gig in Mau Mau Bar, Portobello Road, when she was handed the microphone by the performer. I’ve attended and photographed several of her performances, and once shot her in the studio. She’s beautiful, smart, has a wonderful, distinctive voice, and yet is utterly modest, with no hint of diva about her. It’s no surprise that in the last few years, Baby Sol has rapidly climbed the ladder to success.

Yesterday, I was contacted by Baby Sol’s manager to request use of one of my photos 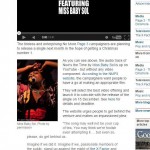 in a Guardian blog post. I made clear that I don’t provide images free of charge to commercial publications; but, due to a miscommunication, the image appeared on the blog. I then spoke to Baby Sol’s manager, who explained that the image was being used to back the launch of a new charity single, in support of the No More Page 3 campaign. Those who know me and my views will realise that I am not a supporter of NMP3. Finding that my image had appeared without my permission, to support a cause I object to was a surprise, to say the least. I made my view clear, and the image was removed from the article early this morning.

I founded the Sex & Censorship campaign with the primary aim of countering anti-sex moral panics, which in turn are used to build support for censorship. Of all the moral panics that have raged in recent years, the one created by NMP3 has probably been the cleverest and most successful. Targeting the Sun newspaper, which is hated by many left/liberal British people, was a stroke of genius, as it brought on board people who would normally consider themselves too liberal to support a pro-censorship cause. It also tapped into that most potent of all bigotries: snobbery. The “Sun reader” has for many years been the archetypal ignorant working-class person.

I too have always disliked the Sun: for years, it has poured out anti-immigrant, anti-gay and other nasty attitudes. It was blatantly racist until blatant racism went out of fashion at some point in the 1990s. It was a strident supporter of the Thatcherite war on trade unionism, and in 1986 was the focus of one of the great attacks on trade unionism, when Rupert Murdoch suddenly relocated his newspapers to a new location, with a new, non-unionised workforce.

The way to deal with publications one doesn’t like is to boycott them, and encourage others to do the same. In my dislike of everything Murdoch, I’ve never bought the Sun, nor its sister paper the Times, nor have I ever taken a Sky TV subscription. But anyone who values free speech will defend the right of a publisher to distribute whatever content they choose, without censorship. NMP3 have instead taken a directly censorious approach, calling on the Sun to withdraw Page 3, and applauding student unions that have banned the Sun from sale on campuses. Oddly, NMP3 deny being pro-censorship, even though censorship is all they stand for. They show as much disdain for Sun readers, and their right to choose what to buy and read, as they do for the free speech of the publisher. And as for the models’ right to work? This is a right that NMP3 don’t recognise.

NMP3 also claim that their only goal is to close Page 3; that they have no interest in wider anti-sex campaigning and indeed they claim on their site: “We love breasts!”. The dishonesty of this claim was revealed when they attended the Stop Porn Culture conference in March, which played host to anti-sex fundamentalists from around the world, including the British anti-sex worker hate group Object. So although they claim they only want to close Page 3, NMP3 have links with campaigning groups that seek to ban pornography, close down strip clubs, remove lads’ mags from supermarkets, criminalise prostitution, and attack music videos from “sexualised” artists such as Beyoncé, Rihanna and Nicki Minaj (yes, all black artists – surprise!)

The NMP3 people I’ve encountered are all terribly nice: they seem to be the Women’s Institute wing of the anti-sex movement, leaving the nastier attacks on women-who-dare-to-be-sexual to Object and Gail Dines. But for all the politeness, they are building a formidable pro-censorship movement, and a head of steam that can be directed far beyond Page 3.

The arguments made by NMP3 employ a variety of false claims and moral panic techniques that we’ve seen many times before. Although there is no evidence for the nonsensical “sexual images cause men to objectify women” claim, they make it frequently, and then go on (completely dishonestly) to link Page 3 with abuse and violence against women. The NMP3 organisers are no-doubt aware that there are no studies linking Page 3 (or any other sexual imagery) to harm against women, and yet they encourage, and retweet, these claims from their supporters.

Although the NMP3 attacks are couched in the language of women’s rights, the campaign actually creates false “rights” in order to attack real ones. The Women’s Lib movement (which, ironically, created the conditions for sexual freedom that allowed Page 3 to ever come into existence) focused on choice and agency: the right for women to choose what they do with their own bodies and how their bodies are depicted. Models have the right to go naked in front of a camera, and to allow their image to be published. Against this genuine right, NMP3 creates a false right: the right for other women to attack the choices of models as to how and where they are depicted.

With no evidence to present, NMP3 falls back on “but what about the children?” type statements, and silly slogans: Boobs Aren’t News. In the argument-free space of NMP3, this is as near to reasoned discussion as it gets. Sure, boobs aren’t news. Neither are horoscopes, but they also feature in the Sun. Shouldn’t these be withdrawn too, especially since they perpetuate silly superstition? How about travel reports, or recipes, or concert reviews? None of those are news either.

NMP3 claim they seek diversity of female representation: but this already exists. Women are presented in a thousand different manners and roles. Nobody attacks any of them, except one: the sexual woman.

The Oldest Taboo: Suppression of the Sexual Female

The idea that women’s bodies must be hidden away – for their own good – is hardly a new one. This idea appears in the Old and New Testaments of the Bible, and the Quran, and doubtless other religious texts. Over and over again, throughout history, woman-as-sexual-being has been attacked, and depictions of sexual women have been destroyed.

Later, women who dare to be sexual were branded witches and murdered. Later still, in Victorian times, sexually liberated women were branded nymphomaniacs and hysterics, and locked in asylums.

And European colonisers of Africa brought “Christian morality”, including the idea that breasts were shameful and should be covered. This old European fear of female nudity has never gone away: it’s just continually reinvented, in new ways, with new language: from witch-hunting to objectification, slut-shaming is one of mankind’s oldest instincts.

There are a thousand good reasons not to buy the Sun. Breasts are not one of them.