Those familiar with this blog will be aware that I have for a long time been a campaigner for sexual freedom, and against censorship. As well as political campaigning, I sometimes write about the science of sex – for example, on how the trade of sex is innate in humans as well as many other species. I have recently launched a dating service that allows users to either offer or request a gift when they post. Readers of the Sex & Censorship blog can get 60 free Jems (worth £45) to try it out (see details at the end of this post).

Many people maintain a 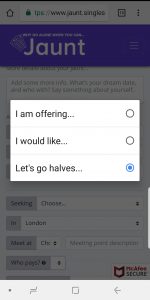 belief that “sex trade” refers to prostitution only. But prostitution is merely one, particularly straightforward, example of sex being traded. From marriage to sugar daddies, from gifts of flowers to diamond rings, the sex trade is vast; quite possibly, it’s collectively the world’s biggest industry.

The price of dating and mating underlies pretty much everything else in the economic and social sphere. When supply rises (as it did for example after the invention of the pill), the price falls. When supply is constrained (by, for example, laws against adultery or prostitution), the price rises.

Similarly, the price of romance is constrained by how much men can pay. Once, when travelling in a West African city, I asked a young men if he had a girlfriend. “No,” he replied mournfully, “I don’t have a moped”. Moped ownership was, in Bamako at least, the entry level for any woman to take you seriously.

The fact that romance is a tradeable commodity is widely understood, but also can be difficult to talk about. And yet, it’s a fact that poorer men are far more likely to be single than wealthier ones. You cannot change human nature, but you can make dating more honest.

This is why we developed Jaunt. Jaunt is a site for singles to find fulfilling dates, not an escorting site. But yes, it does allow a gift to be suggested on each jaunt (our word for a date). So a club night might come with an offer of free tickets, or an evening in a restaurant with a request for dinner and drinks. In fact, you can offer or request pretty much anything you like, except for cash.

The idea isn’t to “encourage” people to pay for dates, but simply to make visible what has always been there. Men spend far more on dating, courtship, romance and mating than women do. This isn’t “wrong”, it’s a fact of human nature. But honesty is important, especially when starting out on a relationship.

Sex & Censorship readers are offered 60 free Jems (that’s plenty!) to try out the site. First, sign up (you’ll get 10 free Jems to start with) and create your first jaunt. Then mail support@jaunt.singles to get another 50 free Jems.