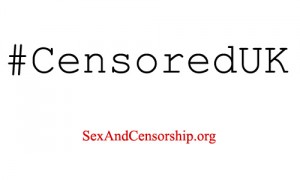 Yesterday’s #CensoredUK Twitter campaign made a splash online, trending nationwide across the UK. We launched the campaign to supporters late on Wednesday. By Thursday morning, regular tweets were being made and by late afternoon, the hashtag was spotted trending in London and across the UK. We often hear people say that the British are more concerned with security or prudery than free expression, but yesterday suggested otherwise. Many British people are outraged with attempts to censor our media.

As of this morning at least The Telegraph had covered the campaign.

The twin strands of this campaign – Sex and Censorship – are deliberately chosen. Today’s push towards Internet censorship comes from two camps: puritans who think sexual expression is harmful, and those who seek to gain power by controlling information. These two groups came together at the ATVOD conference on child protection which was held in London yesterday afternoon. We heard a series of hysterical claims about the effects of pornography, but were offered no evidence to back them.

They do not have the moral high ground – we do! We do not “protect our children” by trying to hide the world away from them. We don’t make them safer by allowing them to hit puberty without knowing what is happening to their bodies, and what the implications are.

We live in an increasingly safe society, but a coalition of campaigners want to convince us that thing are getting worse. A rising moral panic is under way; the purpose of the Sex & Censorship campaign is counter those messages, and replace hysteria with evidence-based thinking.

We thank everyone who has followed so far, and look forward to your support in coming campaigns!

2 thoughts on “#CensoredUK – We Trended!”